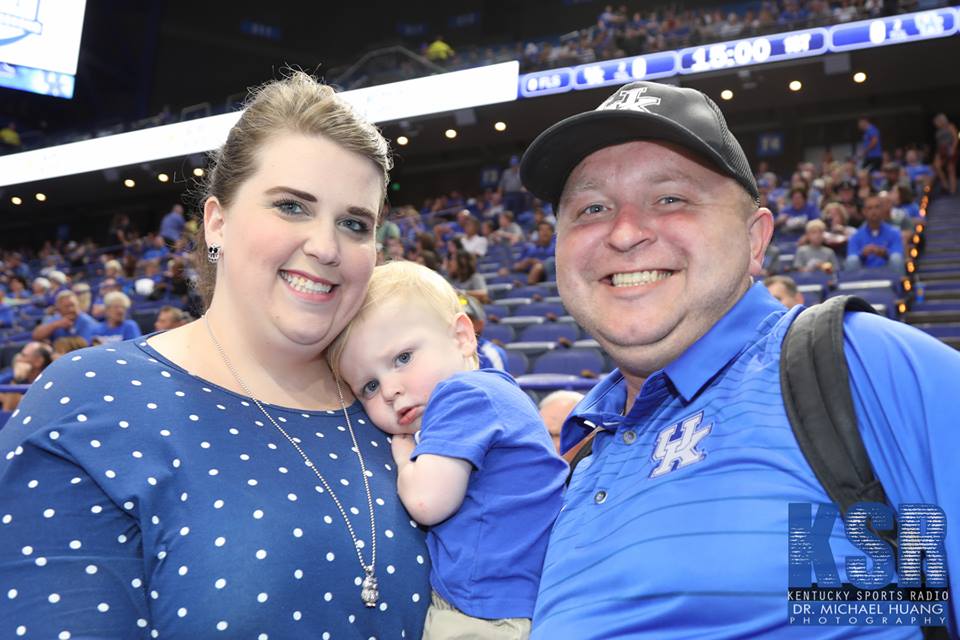 “We named him Cawood, after Cawood Ledford.  If we had a girl, we would’ve named her Keightley.” 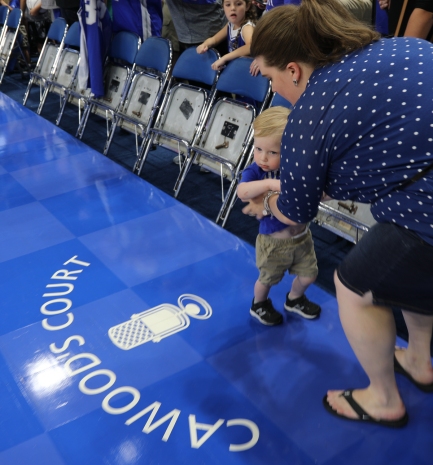 We tried to get a picture of Cawood on his court.

But he would have nothing of it.

For those that don’t know or are too young to remember, Cawood Ledford was the legendary UK play-by-play radio announcer, and Bill Keightley was the beloved long-time basketball equipment manager. Superfans Michael and Katie wanted to honor their legacy with the name of their baby.  I caught up with them at the UK Alumni game on August 24, 2017.  Michael is usually dressed in his blue UK Committee of 101 blazer helping guide people to their seats in Rupp Arena, but this day he was enjoying the game with his family.  I plan on featuring the photos and stories of UK’s best fans, including most of the Committee of 101 in the coming months. If you have a UK story to tell, email me at heartofbbn@gmail.com or contact me through this site.

Previous Next
View All

Best crowd in a long time! Really fun game, until the end.
She’s a superstar on and off the court. Always great to cheer on @sophrichardson01 who is now only a few points away from 1000 for her career. And a bonus to see @missannapalumbo too!
Happy Chinese New Year! So blessed with the most wonderful wife @dionnahuang who makes it a priority to celebrate my family’s heritage and to share it with our children. Missing my parents more than I can say, but so lucky to have my mother’s treasure trove of recipes to bring back wonderful memories. Oh, and you’re welcome for the cabbage with peppercorns recipe in its entirety (use napa cabbage). #yearoftherabbit
Back to Back half court shots by coach Turner and Oscar! #bbn
Emotions were all over the place, but Kentucky triumphed 85-71 over Georgia, led by Oscar’s 37 points and 24 rebounds
Rough night. #bbn
Close game last night. Maybe a little too close.
Opening up @smithw1966 ‘s basement bourbon bar with @mikewmagic and @ckcundiff